RAILWAYS ​LIFELINE TO THE NATION

Indian Railways plans to run on 100 percent electricity by 2024 and become a net-zero emission network by 2030.

Single largest employer in India and 8th largest in the world

The Indian rail network has 123,542 km of total tracks over a 67,415 km route and about 7,300 stations. The railways run close to 13,000 passenger trains that carry over 23 mn passengers daily. The Indian Railways transported over 109.68MT of freight in November 2020. Indian Railways is the third largest railway sector in the world under single management, the Indian railways was expected to grow with government resourcefulness. The investments in railways, one of 34 infrastructure sub-sectors across the country, was estimated to amount to approximately 124 billion U.S. dollars between 2018 and 2022. Indian Railways’ revenue increased at a CAGR of 6.20% during FY08-FY19 to US$ 27.13 billion in FY19. Earnings from the passenger business grew at a CAGR of 6.43% during FY07-FY19 to reach US$ 7.55 billion in FY19P. Freight revenue rose at a CAGR of 4.30% during FY08-FY19 to reach US$ 18.20 billion in FY19.

India became the first developing country and the 5th country in the world to roll out the first indigenously built “state-of-the-art” high horse power three phase electric locomotive when the first such loco was flagged off from Chittranjan Locomotive Works (CLW). CLW has been achieving progressive indigenisation and the cost of locomotives has come down to the level of Rs.13.65 crore. Diesel Locomotives Works, Varanasi has produced state-of-the-art 4000 HP AC/AC diesel locomotives in April 2020. These locos are capable of hauling 4,800 tonne freight trains at a speed of 100 KMPH and can run continuously up to 90 days in one stretch without any major maintenance.

The participation of both private and public sectors in developing rail infrastructure has gone up. A joint venture company was formed with Pipava Port authorities to provide broad gauge connectivity to Pipava Port. MoUs have been signed between the Ministry of Railways and the State governments of Andhra Pradesh, Karnataka, Maharashtra, West Bengal, Tamil Nadu and Jharkhand in developing rail infrastructure in these States.

To give improved telecommunication systems on Railways, Optical Fibre based communication systems has been adopted and laying OFC has increased to 7,700 route kilometres this year. Rail Tel Corporation has been created to make a nationwide broadband multimedia network by laying optical fibre cable along the railway tracks. This system will provide better operational and passenger amenities and additional revenue to Railways. 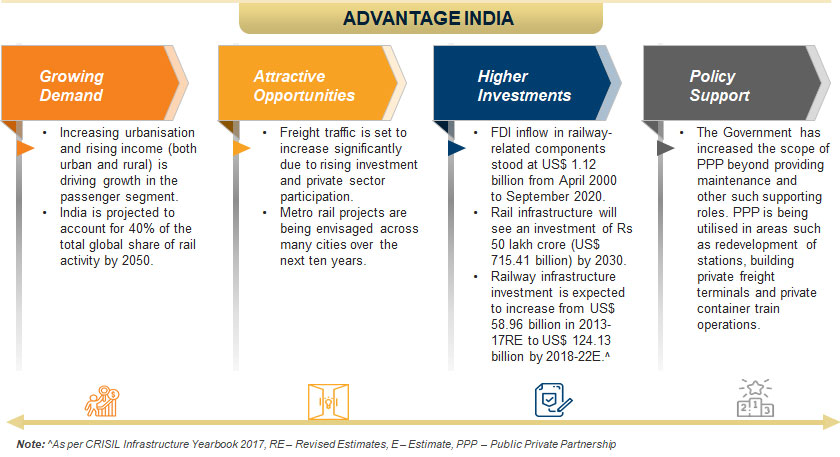 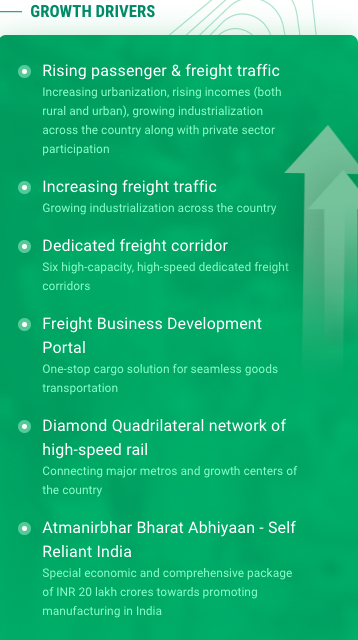 The growth of smart railways may be attributed to increasing population, growth in urbanization, rising concerns of safety and security among passengers, the offering of fast, efficient and hassle-free services, formulation of obligatory government regulations for incorporation of smart features in the railway sector and novelty in rail technology across the globe and projected to register a CAGR at 14.8% in term of value. Smart railways integrate information and communication technology to the railway infrastructure to offer new-generation solutions and services for rail transportation and operations. Smart railways offer advanced and reliable services to passengers to meet the increasing consumer demand for efficient and safer services. This helps in enhancing operational efficiency, passenger experience, and provides high returns on investments. The demand for smart railway is attributed to the increased adoption of IoT technology and the growing demand for cloud-based services. The emergence of the Internet of Things has propelled technological advancements in the fields across the network, radio access, sensors, and other systems. Radio-based communication network offers Bluetooth, Wi-Fi, and 3G, and 4G services to deploy smart railways projects. The market also seeks opportunities due to the emerging trend of smart cities. However, the lack of ICT infrastructure is expected to limit market growth.

The smart railway infrastructure comprises various components including multimedia infotainment displays, video surveillance cameras, and networking and connectivity devices at stations. The multimedia infotainment displays are used at stations to display train schedules, number of passengers, and also for entertainment. The demand for smart railways services is growing with increasing adoption of smart amenities and safety, due to rising demand for smart ticketing, smart maintenance & control, and others. The smart railways solution includes advanced security monitoring systems which allow the station staff to monitor the premises. Passenger information system offers real-time information related to train routes and schedules. Similarly, rail communication and networking systems allow the operator to track and control train traffic adherence to schedules and speed, all in real time. The increasing adoption of high-speed rail by developing countries is a key factor expected to boost the growth of the market in the forecast period. Changes in lifestyle and high disposable income of people are causative of the increased emphasis on high-speed trains for public transportation. The demand for smart railway systems is higher in China and Japan, due to increased investments by these nations for the development of high-speed railway systems.

The increasing need for urban connectivity is likely to drive the growth of the market in the forecast period. Transport infrastructure is considered to be a significant factor for a nation’s progress. Better physical connectivity in urban and rural areas is crucial for economic growth. Passenger rail traffic worldwide are likely to double by the year 2020, posing a challenge for both the train operators and commuters. By tracking trains across networks by deploying geolocation and processing this data through analytics, train operators can operate trains in an efficient way.

ROLE OF ALUMINIUM IN THE CONSTRUCTION AND RAILWAYS...

Reply Retweet Favorite
We are supporting IBA for their grand success in #bioenergypavilion2022 @biogasindia Thanks for choosing us as yo… https://t.co/2VFiYTPn3m